Birth of a New Reality 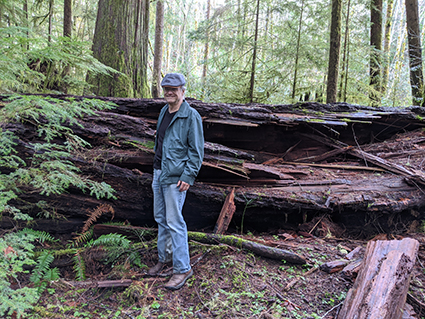 After getting married in 1998, Michael and Heide Hermary moved to Vancouver Island where they lived in a funky little cabin on the beach. Michael taught at Malaspina College and Heide worked in landscape design. One day when Heide was recovering from a broken knee, she asked Michael to put weed and feed on their lawn, which he refused to do. “There’s somebody I want you to meet,” he said. With Heide on crutches, they walked together to the beach. Michael rolled over a rock and pointed to crabs and other creatures living underneath. “If I put that stuff up there, when it rains, it will come down here and it will kill these guys and I don’t want to do that,” he said.

Heide, being the intelligent woman that she was, understood immediately. “I think that was her ecological awakening,” Michael said. She had a lot of knowledge in horticulture, but it was then where she began to understand the impact our actions have beyond where we do them.

Michael’s interest in ecologically-sound environmental practices began as a young teenager. Growing up, his father worked in oil and gas and mining exploration, which allowed him to see some beautiful aspects of nature, but also gave him an awareness of the more harmful environmental impacts such as clear-cuts, tailings dams and polluted rivers. “I also worked in a nursery where they used a lot of herbicides and pesticides. I didn’t think that was a good thing and as I got older, I became more and more aware of the things we were doing to the world,” he said.”

“When I met Heide and started working with her, she was in her third career as a horticulturist and it was sort of a melding of interests. I think I sort of helped her become aware of the effect of some of the things we do in our environment and she became very interested in urban landcare practices.”

After 9/11, Michael and Heide spent three days talking together. At the time, Michael was on track to get his PhD in Statistics and Heide was still working as a landscaper. They both wanted to do something more meaningful with their work; a shared vision to help preserve the environment.

Heide had developed a curriculum to teach conventional horticulture and then realized she wanted to go the alternative route of organic landcare. So she took some time to get her Master’s in Sustainable Agriculture, which at that time, was the closest thing to organic landcare. She developed a body of knowledge and ended up creating video content, writing courses and a book.

Most conventional horticulture schools were unwilling to rent classroom space to her, because it was counter to what they were doing. When faced with this roadblock, Michael suggested Heide start her own school. To which she replied, “Can we?”

As it turned out, they could.

With credibility and integrity as the two key-stones for how they wanted to conduct themselves and the intention to help people see the interconnectedness of life and the interdependence humans have with the environment, Gaia College was created.

Heide carried the spark and knowledge to teach courses and Michael had the technical expertise for developing the website and online platform. With the help of Astrid Muschalla they translated the classroom courses into an online format. It’s been 17 years since the doors opened, so to speak.

When the college first began, there were a lot of amateur gardeners taking the courses. Now people are taking the courses because they want to work in the horticulture sector and they’re using organic landcare as a methodology or scope of practice, Michael said. “There’s been a big shift in awareness in terms of the environmental impact humans are having in so many different ways and people are coming to understand much better about the environmental cost of many of our practices.”

When people apply principles of organic landcare, there’s a real sense of taking part in creating a new reality, Michael said. “We know there are lots of people who want to do things differently and our aim has been to reach these people.”

When Heide passed in 2016, Michael chose to carry on with Gaia College as a way to honour her legacy, hard work and what they had built together. “What Heide was doing, as far as helping people to achieve a new awareness, was working,” he said. “She was able to articulate a message that people got.”